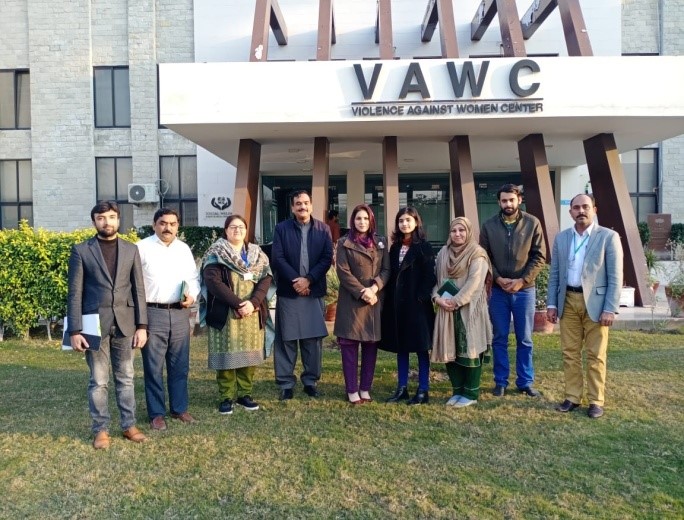 Violence against Women Center (VAWC) Multan was established on 25th of March 2017, after the formal inauguration by the Chief Minister, Punjab.

It was established under Punjab Protection of Violence against Women Act 2016 with the objectives to eliminate all kind of violence against women and now functional 24/7 with all women run facilities, where all disconnected departments serving under one roof - first aid, post-trauma rehabilitation, police reporting, FIR lodging, prosecution, medical examination, and forensics.

The project was intended to provide protective and rehabilitation services to 1200 women annually but it has crossed the figure of 4333 within three years with varied offenses in nature.

The Mediation and Rehabilitation wing of VAWC consists of 4 Psychologists and Mediation Officers. When a case is referred to this department, psychologists conduct an initial session and get a detailed history of the survivor to understand the matter and guide accordingly. Multiple individual sessions, couple and family sessions when required are conducted as per requirement of the case. When both parties agree for meditation with certain and valid terms and conditions, then the case is referred to the mediation officer. Mediation Officer conducts sessions with both parties and ensures audio/visual recording of the mediation process. Mediation document is signed by both parties with their witnesses in the presence of the mediation officer.

The Women Police Station of VAWC is an advanced and independent police station. Police station is led by SP, SHO, 10 ASI's and other staff. All investigation processes are performed in accordance with international standards. The functions of this department are reporting, FIR lodging and investigation of the cases. 1 male and 1 female detention center is also available at VAWC police station. Female detention center is also utilized by other police stations to detain the arrested females in district Multan. One dedicated police vehicle is allotted to VAWC from the police department for raid and other services.

The Prosecution Wing of VAWC consists of 2 prosecutors, court area and judge room. The prosecutors check the challan of police department and pursue VAWC cases in court. Two judges are notified to hear particularly the cases of VAWC.

Panel of lawyers is available at VAWC to facilitate with legal advice and provide legal aid services (free of cost) to the survivors of VAWC.

The Information Technology (IT) Wing advances all case flow processes of VAWC. It consists of 3 System Network Engineers and 2 CCTV monitoring officers. IT department ensures internet connectivity to all departments and maintains a local area network (LAN). It ensures the audiovisual recording of case proceedings in all departments and provides a central storage area to save the data. It performs data analysis on case record and generates presentations. VAWC is equipped with 75 CCTV cameras including PTZ and fixed cameras to avoid any misconduct and security threat in the premises.